From AnyList to Evernote, there are a lot of different options when it comes to grocery list apps for Android and iOS. We’ve tried a lot of them and feel that Notion is the best solution, offering the most bespoke, customizable experience. There’s nothing else out there that can rival the amount of automation it’s able to deliver — for free.

Best thought of as a mix between a task management tool like Asana, database software like Microsoft Access and a drag-and-drop website editor like Squarespace, Notion is a powerful resource that can be used for everything from personal to-do lists and notebooks to project management across a thousand-employee organization. 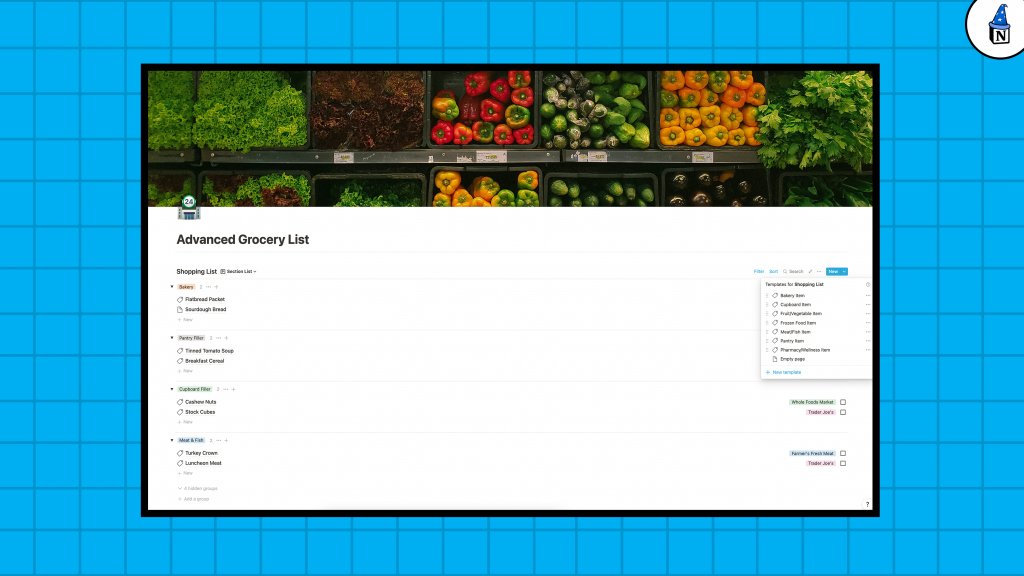 Notion itself is a blank canvas. You can fire it up and start creating your own Grocery List in seconds, but it’ll take a bit of time to implement automations and build solutions that do the hard work for you, so we created our own Notion grocery list template — hands-down one of the most useful Notion templates available.

Designed to make it faster, easier and cheaper to shop, our Notion Grocery List Template bunches items by kind, so you can pick them all up before advancing to the next section of the store. For instance, all fruit and vegetables are listed alongside each other in the list, as are fish and meat. This reduces back-and-forth in the shop.

Research has found that people spend more money when they don’t use a list, and that they are more tempted to make an impulse purchase if they’re in the shop for an extended amount of time, so using our Notion Grocery List Template could not only save you time but money too, by cutting down the amount of time spent in the store.

You also have the option to assign lists to a particular store, then show a list specific to that location the next time you’re there. This takes a second to set up and it’s as simple as selecting a store when adding an item to the list. This can be done at home and on the move because Notion syncs between devices, including Android and iOS.

Because Notion is what you make it, with some modifications you can advance your Grocery List and turn it into a sub-section of a larger recipe database. The features something like this would deliver would be entirely up to you, but you could make it populate your list based on the meals you’ve chosen for the week ahead.

What we’re trying to say is that Notion is the Best Grocery List App because it’s limitless. There are plenty of Notion templates available, including our own Grocery List Template, that’ll get you started and may even see you completely satisfied, while those after a little more have the option to customize it however they see fit.